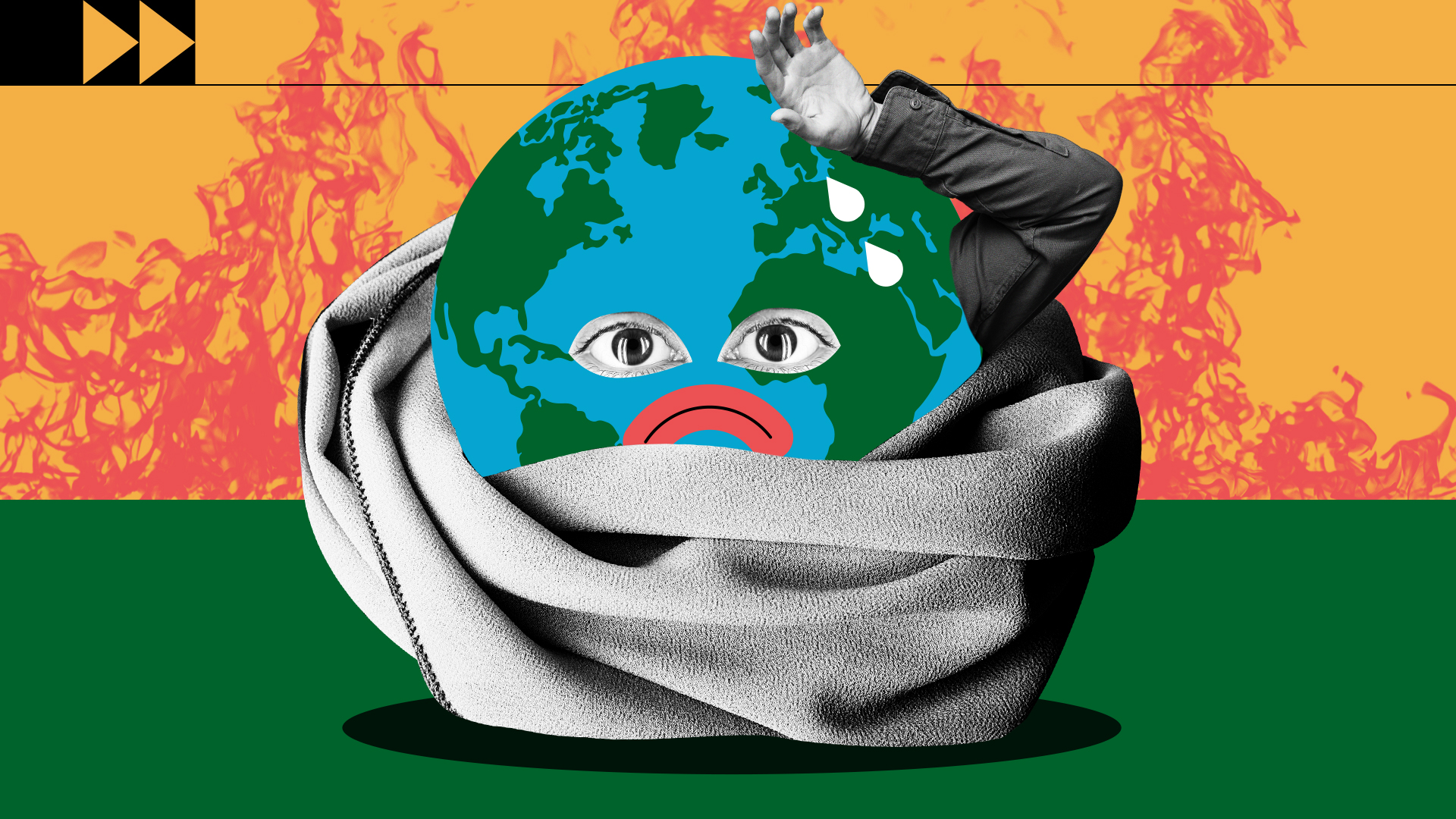 Analysis of the successes and failures of COP27 has focused on its progress with regard to the ‘loss and damage fund’ and the improved bargaining power of the Global South. Meanwhile, others have pointed to the continuing failure to implement a binding agreement and the increasing likelihood of failing to meet the Paris Agreement to keep global warming below 1.5 degrees Celsius. Finally, others have noted the concerning influence of the fossil fuel lobby during negotiations.

While COP27 was taking place, we spoke to a farmer, Mohamed Zalawi, from the governorate of Beja (located in northwestern Tunisia).

While I have seen COP in the headlines and news bulletins, I was unaware of the content of the discussions and that I was unsure how it related to my life and my livelihood. What does this COP do for us?

Nevertheless, M.Zalawi was acutely aware of the changing climate. The forty-year-old farmer said he had noticed delays in the fall rains: “In the past, rains used to prepare the grain-growing season from September, but in recent years, this has been much delayed with droughts extending until November.

M.Zalawi ended by noting the lack of government support and strategy for water management and seed development.

Changing Climate Versus developing the economy?

In recent years, Tunisia has experienced a number of severe environmental issues. Water scarcity and food shortages, internal climate migration, and a waste crisis have all increased Tunisian’s understanding of how a changing environment directly affects their lives and livelihoods. This, however, comes at a time of severe socio-economic crises. Tunisia’s high long-term unemployment rates are now compounded by the war in Ukraine and corona pandemic fallout pushing up inflation, at the same time as Tunisia seeks to secure an IMF loan to save its public finances.

The most recent Afro Barometer notes the strength of public opinion regarding pollution and the environment, with 76 percent of Tunisians believing that pollution is a “very concerning” problem. Nevertheless, the survey also demonstrates some of the ambiguities when environmental concerns come up against Tunisian’s social and economic realities. When Tunisians were asked whether the government should concentrate on the creation of employment at the expense of the environment, or the protection of the environment even if it leads to less employment, the country was split down the middle with 44 percent and 45 percent agreeing with the two statements, respectively. That being said, Wave VII (2021-202) of the Arab Barometer finds that 64 percent of Tunisians think the government should be doing more to address climate change, the highest in the Arab world. We thus see a picture begin to appear whereby Tunisians are keen to see the government address climate change but couple this with solutions to its political, economic, and social problems.

Tunisia’s climate change policy harks back to the 2015 Paris Conference and has been ambitious in its aims. Tunisia ratified the Paris Agreement on October 17, 2016, and in its Nationally Determined Contribution (NDC) stated its aim to reduce national emissions by 41 percent by 2030, compared to its 2010 levels. Since then, it has regularly met its commitments towards the UNFCCC, submitting national communications and biennial update reports.

In 2021, Tunisia published an updated NDC increasing the country’s reduction target to 45% by 2030 (joining Egypt and the UAE as the three countries that have submitted updated NDCs). The 45% target is contingent on international support, estimated at US$ 3.3 billion over the period 2021-2030. Failing that, the country has pledged a 28% unconditional reduction by 2030. Moreover, it was announced prior to COP27 that the Tunisian delegation will use the summit to lay out its strategy for carbon neutrality by 2050. These targets are commendable and reflect Tunisia’s ambition with regard to its green transition, in addition to its willingness to follow international climate change protocols. That being said, the NDC is reflective of Tunisia’s history of grand strategy reports and announcements, which come without a complementary implementation framework that could turn pledges into concrete mitigation and adaptation action.  With this in mind, it is crucial that the recently established climate change unit within the Tunisian Ministry of Environment fulfill its remit to coordinate between various stakeholders and sectors within the field of climate change.

The Tunisian Delegation in Sharm el-Sheikh

In his analysis of the Summit, the academic Adel Ben Youssef, who attended the Conference as a negotiator on behalf of Tunisia in matters of Climate Finance, was critical of negotiators’ tendency to delay negotiations until the bitter end. A. Ben Youssef argues that the “spirit of COP needs to be revisited”.

We are witnessing the emergence of a grey area that looks more and more like a fair without a specific objective.

A. Ben Youssef also calls for a more streamlined negotiating process, and observes, currently, negotiators “wait to the last two days to see progress and compromises, whereby everything is played out in additional time by the ministers!”.

Around one hundred and twenty Tunisian participants traveled to Egypt from Tunisia. The delegation was headed by Mohamed Zmerli, a director general at the Ministry of the Environment and the national representative to the United Nations Framework Convention on Climate Change, and also included fourteen young negotiators (a program launched in 2021 by the Tunisian Ministry of Environment and the German Organization GIZ to support the Tunisian delegation in international negotiations), as well as government ministers, participants from the national union, the UGTT*, and UTICA*, the country’s business and industry association, and civil society actors making for a markedly more diverse negotiating group than that which attended COP26.

The Tunisian delegation organized three technical workshops on the themes of the private sector in environmental policies, increasing climate change ambition, and the impact of climate change on food security. These align closely with the aims of the Egyptian presidency, which had called for greater climate finance for developing nations and the need for greater ambition, as two of the guiding principles for the conference.

Tunisia was a member of both the African Group and the Arab Group. Nour Mansour, a Marine project officer at WWF NA (North Africa), for example, noted to “Blue TN”, her close collaboration with Kenya, South Sudan, Senegal, and Saudi Arabia during the Koronivia Joint Work on Agriculture. As delegates observed, however, the Tunisian delegation did not limit itself to these two Groups. Zoubair Ben Hadj Yahya, a junior climate negotiator, noted to “Blue TN” that the delegate also worked with Japan, Switzerland, Germany, Chile, Brazil, and Canada. Yahya, commenting on the final drafting of articles 6.2, 6.4, and 6.8 of the agreement told “Blue TN” that, “during the negotiations [we] emphasized the readiness of Tunisia and concerns about the cooperative approaches. Within, at first, the African Group’s internal coordination meeting, then we succeeded to make the position of Tunisia more clear not only with other group parties e.g. Environmental Integrity Group (EIG), European Union (EU), and ABU (Argentina, Brazil, and Uruguay) but also with other main negotiators parties such as Japan.” Yahya’s experience chimes with the need for small states such as Tunisia to negotiate as a bloc and use a collective voice to forward their aims. It is also important that negotiators cultivate flexibility in their approach to negotiations with an openness to new alliances and adapt their negotiating strategies to the changing realities of the Summit.

Mansour and Yahya’s experiences attest to the need for small states to draw on, without limiting themselves to, the negotiating power of the COP Groups. Both their testimonies demonstrate how Tunisia was able to use its position with the Africa Group to influence debates but also flexibility as to the other Groups and countries Tunisia engaged with. In light of this, it is important that delegates are able to build relationships beyond the internal coordinating meetings of the African and Arab Groups, reaching out to states that are influential in other Groups. Such dynamism will allow Tunisia to better influence the overall shape of the negotiations and make sure that key aims, including the development of a model guaranteeing economic growth and the general well-being of Tunisia’s population in total,  are discussed widely.

The experience of Tunisian negotiators at COP26

Nour Mansour, who followed agriculture negotiations during the Summit, stressed to “Blue TN”.

Our planet can’t afford another climate summit like COP27! Governments could not agree over quitting fossil fuels and are keeping us on track for a climate catastrophe.

For all of COP27’s disappointments, we must look forward. We must hope that the momentum this COP built on decisions around nature – such as including nature-based solutions in the final cover decision – can help negotiators reach a strong agreement on the Convention on Biological Diversity at COP15, in Montreal in December. We urgently need a Paris Agreement for nature.

Finally, looking towards COP28 in the UAE, Mansour wished to see a “COP of credibility” that “rebuilds trust in the process” of climate negotiations.

As I see it, a successful COP27 for Tunisia means coming up with a clearer vision on how the global goal of adaptation will be quantified, scaling up climate finance and therefore providing more finance for adaptation projects that are grant-based, especially in the water sector and finally ensuring more capacity building to implement Tunisia’s NDC.

The testimonies of Tunisia’s delegation at COP27 demonstrate the difficulties for a small state such as Tunisia at a global climate summit. Many of the delegates expressed frustration at the lack of progress on binding targets and the continuing use of fossil fuels. Looking forward to COP28, this paper makes a number of policy recommendations: