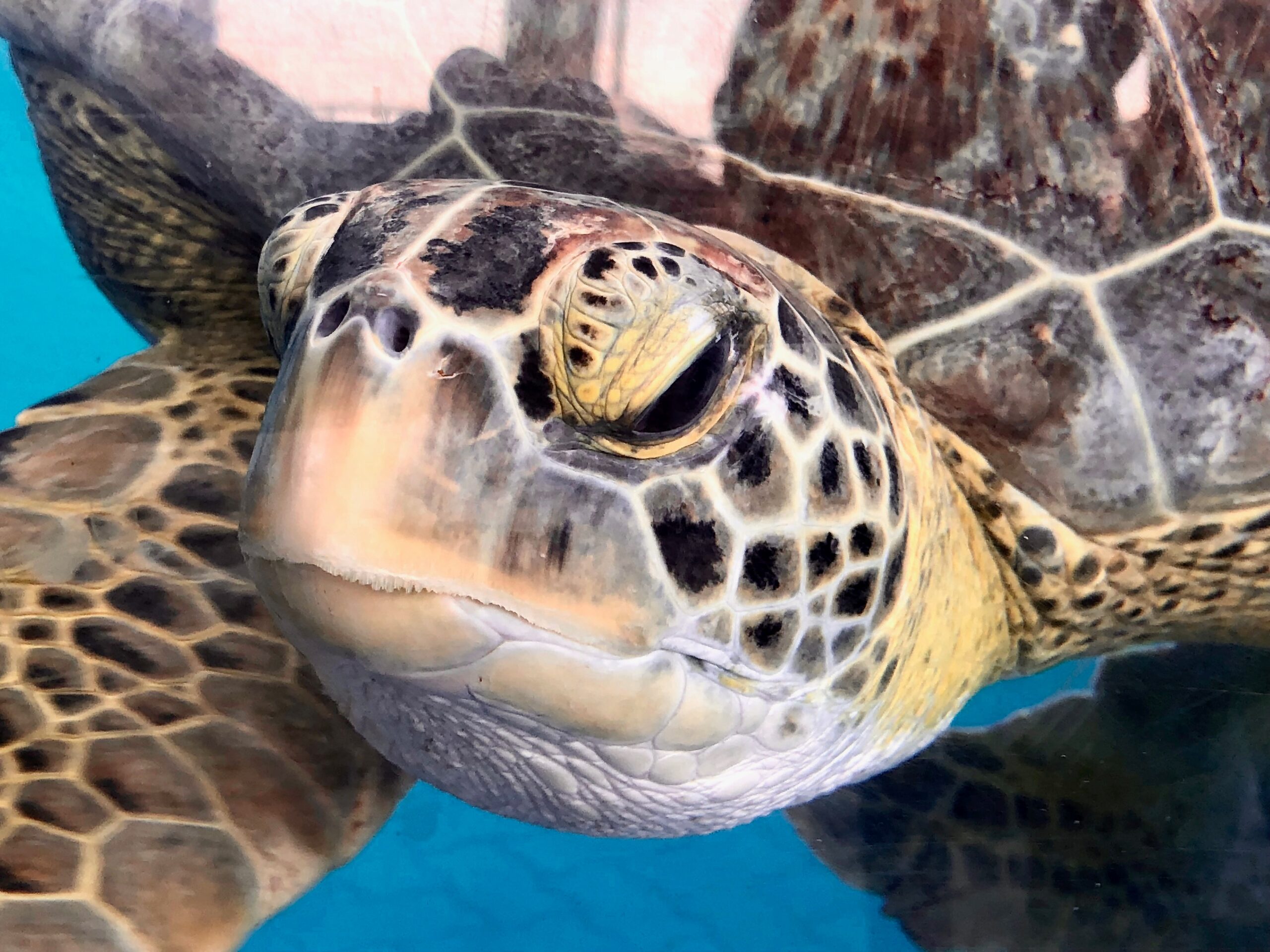 The « Sea Wings » is the emblematic creature that swims and migrates between the oceans. Sea turtles are both fascinating and impressive and have been a part of oceanic ecology for 150 million years. It is so endangered that no population can be considered safe. Due to human intervention, these reptiles are threatened by many factors, including pollution, poaching, illegal or accidental fishing, traditions, and climate change, despite the significance of their contribution to the preservation of the marine ecosystem and the advancement of other marine species.

Today, the International Union for Conservation of Nature has listed six of the seven sea turtles on the List of Vulnerable, Threatened, and Critically Threatened Species (IUCN).

Marine turtles: an endangered species under infinitude of threats

The sea in Kerkennah was full of goodness, as all species like octopus, cuttlefish, squid, and different types of fish were there as well as the sea turtle we frequently observe. I have more than 50 years of experience at sea as a fisherman here in Kerkennah Islands, and the “Charfia” is the fishing gear that I have used since childhood.

According to the Kerkennian fisherman, the incapacity to understand scientific information, on the one hand, and the behaviors he inherited from his ancestors, on the other, are the factors that allowed him to eat sea turtle meat.

I am one of those who have consumed turtle meat in the misguided idea that it was advantageous to their body and health.

Globally, the sea turtle is an animal threatened by various anthropic factors and this impacted its presence. As a result, all different types of pollution such as plastic and oil are a threat to the existence of sea turtles, 60% of turtles whose autopsies were performed had plastic in their digestive system because this reptile feeds on marine debris that he mistook for jellyfish. The interactions of sea turtles with diverse fishing operations are the main cause of their death in the Mediterranean, including Tunisia. 150,000 sea turtles might be captured in longlines and trawls in the Mediterranean, and 39,000 of them could die as a result of the varied fishing methods.

Sea turtles confront a number of threats, including interactions with fishing activities like as longline and trawling, which do not intentionally target marine turtles but can accidently strangle this animal while fishing.

Affirm Imed Jribi, researcher and life sciences Professor in the University of Sfax

The sea turtle is a migratory species that migrate across the oceans to feed and reproduce, and its presence in different regions is regarded by scientists as a bioindicator of the ecological state of these areas. The rise in global temperature has an impact on the life cycle of this reptile, as these changes disrupt their orientation during migration and affect the sex ratio of the babies, as well as the rise in sea level, which causes the degradation of nesting beaches.

Sea turtles are affected by global warming; the sex ratio of baby turtles is affected by temperature changes. If the temperature is still rising, there will be more females than males, which could result in the extinction of this species, and that could be our next challenge in the next few years.

Because marine turtles migrate, we cannot declare that their threats have vanished. » As a result, unless conservation efforts in the Mediterranean are coordinated, this animal will remain endangered. Even if the situation is more or less steady, we must continue to collaborate on marine turtle protection.

Marine turtles: the safeguard of the fishermen

The Sea turtle is an archetypal animal and bioindicator of the good ecological state of the Mediterranean Sea. Three marine turtle species exist in Tunisia’s seas and the Mediterranean: the loggerhead turtle (Caretta caretta), the green turtle (Chelonia mydas), and the leatherback turtle (Dermochelys coriacea). The most common turtle in Tunisia is the loggerhead turtle, which nests on various Tunisian beaches, specifically the beaches of the Kuriat islands. The Gulf of Gabès, which serves as a feeding and wintering area for this species, is also important for other species of marine turtles, so the presence or absence of the turtle in these areas provides various information to researchers and scientists who regard the marine turtle as one of these bioindicator species for understanding the state of the sea.

Many turtles move to this location, especially in winter, to feed and enjoy the warm waters of the Gulf of Gabès. Furthermore, there are around 20 loggerhead turtle nesting sites in Tunisia, of which only two are stable, including the beaches of Chebba and the Kuriat islands, with the remaining locations along the country’s coast being irregular and potential

Other scientific research projects carried out by researchers in order to minimize threats to marine turtles and understand the state of the sea, such as the study of stomach contents, the genetic study to understand the geographical distribution of the different populations of marine turtles, and above all to find solutions to minimize the impact of fishing gear, have been carried out in Tunisia for 30 years. These projects have included different actors of the society, mainly the fishermen who have been considered as the fundamental node of the conservation of marine biodiversity, in return the marine turtle is a crucial element of the fisherman’s life and contributes to ensuring the subsistence of those who use the traditional method as « Charfia » in Kerkennah islands for example.

The existence of the sea turtle, is responsible for the reduction in the number of species that can ruin fishing gear and have no economic value, such as jellyfish that can choke creeks during flowering and blue crabs that are invasive and injure the Charfia.

Conservation measures for marine turtles must be maintained

The Kerkennah Islands were once among the Tunisian locations where sea turtles were offered for sale and where the locals ate their meat. Thanks to Tunisian laws that expressly forbid the consumption of sea turtles and the efforts of governmental and non-governmental organizations that have made significant efforts to inform and sensitize fishermen and locals, these practices have started to decline, particularly in the last ten years and Kerkenian fishermen are frequently assist in the rescue of marine turtles accidentally caught in their fishing gear. Since 2021, 50% of the sea turtles transferred to the rescue center within the university of science of Sfax were from Kerkennah.

I can’t remember how many tortoises I was able to save. I frequently work with the Sfax University’s Center for the Rescue of Marine Turtles, and thanks to the awareness-raising campaigns in which I participated, I have learned how to properly handle sea turtles when I find them in my « Charfia. » I’m so proud to be an example of a responsible fisher who helps to preserve sea turtles

To protect the three marine turtle species that exist in the Mediterranean Sea, an action plan was created in 1989. It is a strategy including short- and medium-term activities that is updated every four years in response to the natural and anthropogenic changes that could affect the existence of marine turtles. In 2020, and within the framework of the MAVA project, Tunisia adopted its action plan in consultation with national and international experts. This plan is considered the constitution that aims to protect marine turtles sustainably.

The Ecosystem-Based Approach: we supported the protection of the sea turtle on the one hand and the Kuriat islands on the other since they are the only stable site for the sea turtles nesting. The conservation of the species and its habitat is the strategy of RAC/SPA.

Tunisia has made significant progress in sea turtle conservation, thanks to various activities supported by SPARAC and in collaboration with various organizations. One of the most important activities carried out in Tunisia is the establishment of the marine turtle rescue center in Monastir in 2004, which is critical for educating and sensitizing its visitors, who include children, scientists, and even fishermen.

The sea turtle, in my opinion, is the creature that gave birth to a family that united all Tunisians and others living along the Mediterranean.

Sea turtle by-catch in the Mediterranean